Most passive observers didn’t notice it, but the last week served as a major turning point for three of America’s biggest condo markets …

You might have seen one of these stories on page 18 of the business section or heard it on CNBC, but few people have recognized the significance or made the connection between these three seemingly minor news points.

Because while each of these three markets—San Francisco, Miami and New York—have their own story to tell and their own news to be excited about, taken together they add up to a much larger indication on the health and direction of our national condo market.

It all started in Manhattan, last Friday …

The building itself has a pretty interesting look—an artsy, futuristic façade with clever architecture and large windows. 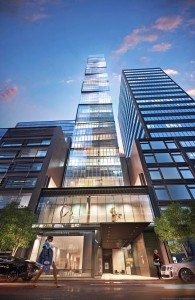 Even the development company; curiously named “Euro Properties,” doesn’t sound out of place for New York City. It’s not until you realize that Euro Properties is actually based out of Hong Kong … and that the project is being entirely funded by Chinese investors (a first for the five boroughs) that the average viewer starts to sit up and take notice.

Due to the building’s narrow size, developers are building just one condo unit per floor, and promising amenities and prices to rival those of Manhattan’s other ultraluxury offerings—which are going in the neighborhood of $8,000 per square foot.

It’s a bit of a gamble considering the specific neighborhood they’re working with, but in the long view it’s likely to work out. And that’s the real key to this part of our story;

You see, the knee-jerk reaction to hearing about foreign real estate can often be a defensive one, until you realize how development works in megacities like New York. You’re talking about a metropolis where people fight tooth and nail over tiny parcels of land … pay millions to buy out dilapidated buildings just to build on the land underneath. In general, all the easiest developing has already been done.

It’s hard to find a great deal as a developer, and it can be even harder to secure funding from a bank that’s loaded down with a bunch of awful loans it made on single family homes seven years ago.

So how do you build the new condos that are actually in demand … how do you fund the tough but totally worthwhile projects that can take a decade or more to finally come to fruition? It’s hard to get that money from the banks. And despite the introduction of new crowdfunding portals like Property.com, you’re still not going to get all that money from American Private Investors.

So who do you turn to?

You turn to investment-minded foreigners who are interested in making a super-long-term investment in what they see to be a “Safe Haven” kind of asset. We saw a great deal of this last year with the popularization of the H-1B visa program, and as long as foreign investors can come to terms with developers and authorities, we’re bound to see a great deal more in the near future—making this individual new building a very big deal …

We reported this a few weeks back when San Francisco’s tiniest condo sold for just under $500,000. 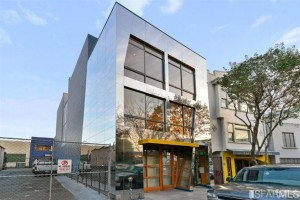 And now, the City by the Bay is back in condo news with an $8 million condo sale—the city’s first ever.

In a combined buy by an as-yet unknown buyer, two 3-bedroom units at 147 South Park were picked up for roughly $4 Million each. Newly-constructed by MT Development and designed by Geddes Ulinskas/CCS Architecture, the two condos occupy a relatively small building with a distinctly Pacific, almost Art Deco style to them.

And it’s all ultra-lux too; from the saline hot tub on the roof to the custom millwork and private elevator—it’s all the trappings of downtown living with the comfort of owning something like a townhome. Albeit it a pretty pricy townhome.

Regardless of the condo’s status, one thing is clear; San Francisco—like Las Vegas and Boston and Dallas—has been bitten by the luxury condo bug, and well-heeled locals are willing to shell out record-breaking prices for bespoke downtown homes.

This is a fantastic trend given how difficult it can be to develop in a place like downtown San Francisco. But seeing that buyers are willing to pony up for the dream homes that seem to be in demand … that alone will be enough to get developers fired up about new construction …

Zalewski pointed out that at present, less than 15% of all condos sold since the beginning of the last condo cycle (in 2011) have been relisted. That’s a pretty strong indication that despite ravenous sales and more new construction than any other city in the country—that many of Miami’s buyers are in it for the long haul instead of speculative reasons.

This is a big deal; especially in Florida, a state known for overdoing its real estate speculation.

After all, flipping has been a huge practice down here for ages; not just with homes, but especially with pre-construction condos. You’d just put 20% down and then as soon as construction came to a close, you’d sell out for a healthy profit based on how much the real estate market grew over the last year or so.

You can see how that kind of speculation can be terrible for business—it inflates the perceived demand, prices out honest buyers, and makes a weak foundation in the event of future turmoil.

Zalewski points to the new presale deposit structure (requiring 50% up front) as potentially being responsible for limiting the number of speculators in the market; which is great news if that’s how it works out.

Additionally, Zalewski mentions that the 50% policy may come under pressure in the final two years of the cycle, as the over 11,000 units now under construction begin to come onto the market and compete for buyers. If so, the city could potentially see an influx of speculators, but for the moment policy seems to be holding its ground.

In larger cities all over the country, condos—be they an affordable pied a terre or an ultraluxury penthouse—are becoming more and more sought after by all kinds of buyers.

Foreign investors and developers realize this, and their successful inclusion can only help the market grow. And even as new luxury markets spring up in places like San Francisco, we’re seeing cities like Miami mature in how they handle the unique business of buying and selling dream homes.

Taken together, it all adds up to the simple fact that condos are a great place to be right now.